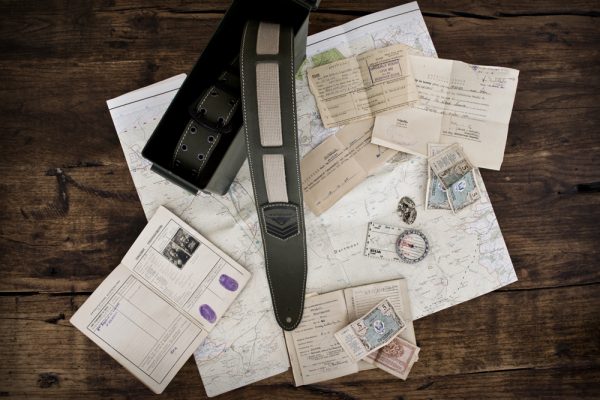 We’re calling in the big guns on this one. The boys in our ‘secret weapons division’ have cooked something up to aid those on the frontline of musical performance – those whose weapon of choice is a guitar that is…

Vanguard is spearheading our limited-edition guitar strap projects. Its style is inspired by that of the military. In fact, every aspect of it draws influence from the armed forces in some way. From its green leather and canvas to the adapted Heistercamp logo. But I’ll get into the details later.

First, I want to explore why we’ve made Vanguard. Why are we making a military designed guitar strap? The answer is twofold. Two of the founding fathers of Heistercamp served their countries through National service. Crafting Vanguard feels like paying homage to them, and an important chapter in both their lives, in our own way. If you want to learn more of our history, you can do so here. The other reason, is that we’ve always been fascinated with the World Wars period of history. An indisputably horrific time for mankind but one that not only saw real monsters come to light from within our species, but real heroes too. To be honest with you, we wanted to have a go at translating this fascination into our own medium. And the translation is Vanguard. 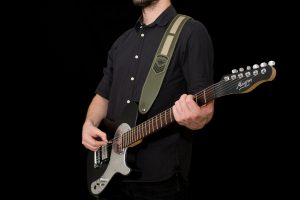 Vanguard has been made using a deep green, veg-tanned leather; tough, with a more rugged feel than our usual leathers. We’ve included our high-density padding and lined the strap in a cotton canvas – a material prominently featured in military attire – which will be comfortable and gripping in use. We’ve also utilised a heavy cotton webbing to thread through the top leather, creating an effect often seen on military vests or backpacks. This would offer soldiers versatility and allow them to easily attach and detach a range of tools of their trade. For Vanguard it mostly just looks cool but does allow you the opportunity to attach things if you so desire… 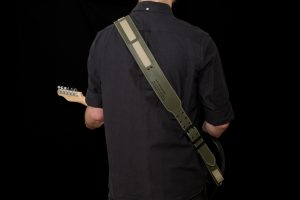 The threaded webbing feature runs most of the length of the strap. At the front of the strap, we’ve included a secondary piece of leather, reminiscent of the patch you’d find on a military uniform, displaying the soldier’s rank. And that’s why you’ll find the familiar chevrons, alongside the Heistercamp logo, heat-pressed into this patch. At the rear of the strap, you’ll find another heat-pressed area, this time with the words ‘Make music, not war’ followed by a serial number. The serial number has been comprised of the service numbers from both Heistercamps that served in the military. Finally, there’s the buckle piece. We’ve used a black, double-pronged buckle from our Onyx range. It fits the feel of the strap and the military theme. To increase the authenticity here, we’ve included two buckle loops and attached metal eyelets on the buckle holes. 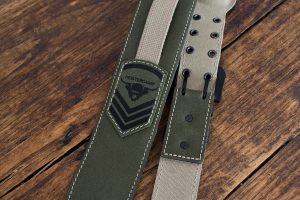 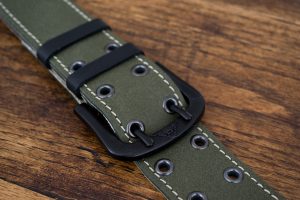 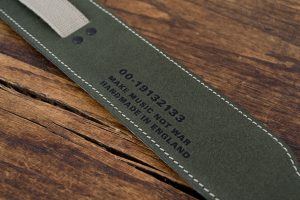 From a guitar playing point of view, Vanguard features one of our cable tidies as standard (this time made from the webbing) and you’ll still be able to choose from a range of strap lengths and the selection of buttonholes that we usually offer as part of our bespoke experience. Plus, you’ll have the aforementioned threaded webbing, so you can attach all sorts of other things you might want whilst you’re shredding. For example, you could have a can of beer dangling there, you know, in case of emergencies… or a harmonica… I don’t know, you’re the musician, I’ll leave that to you! 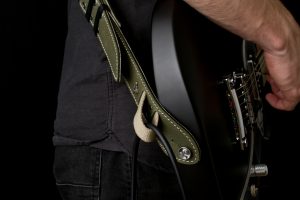 Birthing Vanguard has been a labour of love rather than a struggle of war. The original ideas were inspired by our history and interests as I’ve detailed above. From there, it was a case of researching the chosen theme for aspects we could adapt for a guitar strap. Then, we got to work trying out those various aspects. This meant lots of designing, followed by drawing up card patterns from those designs to then using the patterns to test the designs on the chosen materials. When we were happy with it all, we commissioned the tools we’d need to craft the finished Vanguard. Then came the more exciting parts. With the tools arrival, we could finally make Vanguard in its entirety, as we had envisioned it. And we could also think about the cool extras to include in making Vanguard a complete package, such as the ammo cases that will house Vanguard on its way to you! 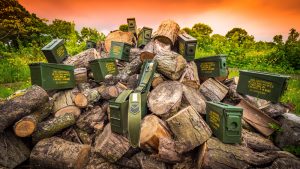 There’s something so satisfying about seeing on the bench in front of you, the completed project that you’ve been planning and working on for quite some time. And now we have the subsequent excitement of releasing it to you! Plus, Vanguard is just the beginning, it’s leading the way for future projects!

If you’re interested in joining the frontline of our limited ventures, you can enlist Vanguard here. If you would like to stay ahead of the game for future releases make sure you are subscribed to our mailing list.